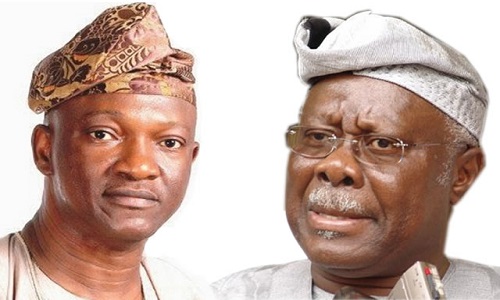 Ahead of the August 17 national convention of the Peoples Democratic Party, PDP, a former deputy national chairman of the party, Chief Bode George, has described the party’s candidate for the 2015 governorship election in Lagos State, Jimi Agbaje, as a modern day political Judas.

George, who is vying for the national chairmanship position of the party, was reacting to Agbaje’s insistence to run for the position against him. Both politicians are from Lagos State.

The former deputy national chairman, who supported Agbaje to emerge the PDP flag bearer for the governorship election in Lagos to the chagrin of some other chieftains, said he expected that the latter would reciprocate the gesture by supporting him (George) on his ambition to become the next national chairman of the PDP.

Speaking at the weekend, George said the public support he gave to Agbaje during the governorship election was one of the major causes of the crisis in the Lagos State chapter of the PDP.

“I am very disappointed but not angry”, he said. “Vengeance is not mine, it is God’s. I want to quote the book of Ecclesiastics, which says that there is a season for everything. Whatever you sow in your lifetime, you will reap’.

Still quoting copiously from the scriptures, Mr. George said “Our Lord Jesus Christ said that one of his disciples would betray him. The disciples started looking round. Judas Iscariot, the traitor, has been around from time immemorial. It’s a shame. That is his (Agbaje’s) choice. I just pray that God would continue to direct this country. God has told us that it is only Him we can trust, not human beings”.

“Agbaje knows what is right. My advice is that he should step down. He should obey his elders.  As a Christian, we should have the fear of God. If he insists on contesting, I cannot stop him. Let the decision be made by the delegates at the convention”, he added.

When contact, Mr. Agbaje said he had nothing but utmost respect for George.

Speaking through his spokesman, Mr. Felix Oboagwina, the PDP stalwart said he was not a betrayer as being claimed by his one-time political benefactor, adding that he decided to vie for the position of national chairman in the national interest.

Oboagwina said, “For Jimi Agbaje, the national chairmanship position was never his ambition. He never aspired to it. The stakeholders decided that they needed someone who would not have to deal with a reputation crisis and they chose Agbaje.

“Agbaje never betrayed Chief Bode George. He is not a betrayer. He has all the respect for George but this is beyond true allies; this is beyond Lagos State. He is contesting in the national interest. The party has created a level playing field. Let the best man win”.