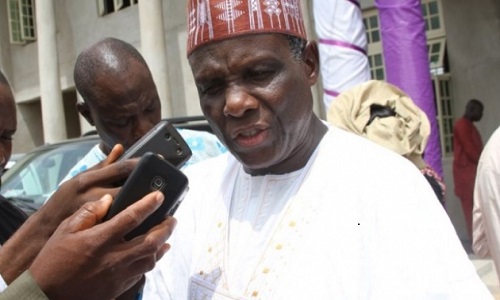 Ahead of the August 17 national convention of the Peoples Democratic Party, PDP, the Board of Trustees (BoT) led by Senator Walid Jibrin, has inaugurated an 18-man reconciliation committee to unite party stalwarts, leaders and members.

The PDP is currently engulfed in a leadership crisis as two chieftains, Senator Ahmed Makarfi and Senator Ali Modu Sheriff, battle over who should occupy the national chairman’s seat.

While the Makarfi-led faction, which has the support of major organs of the party was pushing for the August 17 convention to take place in Port Harcourt, the Rivers State capital, the Sheriff-led faction opposed the convention.

The faction described the Makarfi-led caretaker committee as an illegal contraption, with Sheriff claiming that he was the only chairman of the party recognized under the law, with the powers to convoke a national convention to produce new leaders.

At present, there are about 15 court cases instituted by contending groups within the party.

While inaugurating the Prof. Jerry Gana-led reconciliation committee yesterday in Abuja, Jibrin expressed optimism that the committee would put an end to the lingering leadership crisis bedeviling the party since May 2015.

Jibrin said that the BoT, as the conscience of the party, cannot fold its arms and watch the PDP destroyed.

He said that the party needed to re-position itself and embrace the vision and mission of its founding fathers.

He appealed to party leaders, who still had cases in court to withdraw them for the committee to resolve all the contentious issues politically.

He said: “We had sleepless nights, trying our best to see that the party’s integrity is maintained with reference to the dreams of our founding fathers. We should not allow the PDP to die. Based on the dream and foundation of this party, our founding fathers, some of them are alive and we are grateful to them.

“It is above individuals and therefore, we must all ensure that we resolve this matter politically. It is on this issue of political consideration that we decide to form this committee. ‎Even those that have problems should cool down so that their names will be written in the history of not only the PDP but Nigeria”.

Speaking shortly after the inauguration, Prof. Gana, a former minister of information, promised that the committee would be responsible and fair in the discharge of its responsibilities.

He specifically pleaded with the Sheriff camp to allow the committee resolve the crisis by making himself available for discussions, stressing that the party should go into the convention united.