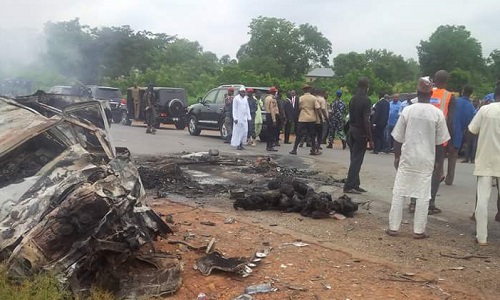 The Kogi State Command of the Federal Road Safety Corps (FRSC) yesterday said it performed mass burial for a total of 16 persons killed over the weekend in a fatal road accident along Lokoja-Gegu-Abuja highway.

The FRSC Sector Commander Mr Ogochukwu Ugboma, said the victims were buried in a mass grave at Alewu village on the highway because their identities could not be ascertained as they were burnt beyond recognition.

Mr. Ugboma said the police and environmental officials from the Kogi Local Government Area, participated in the burial.

The FRSC sector commander disclosed that 17 persons were involved in the accident, which occurred on the night of August 5 at Alewu village, pointing out that all the occupants of the two vehicles involved, except one man who sustained a minor injury, died in the accident.

Ugboma said that the injured victim was later treated at Ideal Hospital, Koton-Karfe and had since been discharged.

The FRSC boss blamed the drivers of the two vehicles for the accident, stating that both of them left their lanes, which resulted in a head-on collision.