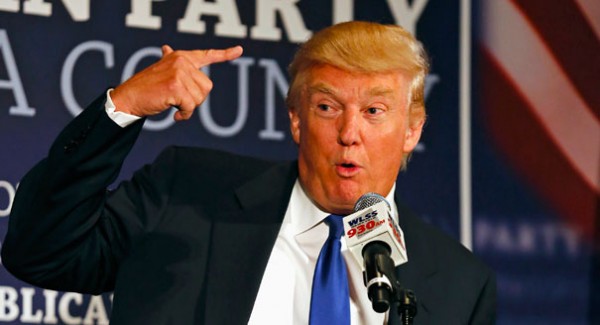 On Wednesday, Republican candidate Donald Trump added to his list of controversial statements by claiming that the Democrats’ presidential nominee Hillary Clinton and President Barack Obama “founded” the Islamic State (IS) group.

Trump while addressing supporters at a rally in Fort Lauderdale, Florida, also said the extremist group is “honouring President Obama.”

“He is the founder of ISIS,” Trump said, using a term for IS.

“And I would say, the co-founder would be ‘Crooked Hillary Clinton’,” Trump shouted, over cheers and applause from the crowd.

Trump made this this claims just one day after making comments interpreted by many as inviting gun violence against Clinton.

Trump appeared to suggest on Tuesday, possibly in jest, that Clinton or her Supreme Court nominees could be shot, as a way of preventing her from making judicial appointments if she wins the November presidential election.

The former secretary of State on Wednesday sternly rebuked Republican presidential rival’s “casual inciting” of violence, saying he had “crossed the line.”

“Yesterday we witnessed the latest in a long line of casual comments by Donald Trump that crossed the line,” Clinton told a rally in Des Moines, Iowa.

“Words matter, my friends. And if you are running to be president, or you are president of the United States, words can have tremendous consequences.”

Trump and his campaign had quickly sought to douse these flames, insisting the Republican flag bearer was merely urging gun rights supporters to reject her candidacy at the ballot box.

Clinton also warned of the dangers of reckless language during a presidential race.

She slammed Trump’s “casual cruelty to a Gold Star family,” referring to the billionaire’s clash with the parents of a Muslim American soldier who was killed in action.

“His casual suggestion that more countries should have nuclear weapons, and now his casual inciting of violence,” she added.

“Every single one of these incidents shows us that Donald Trump simply does not have the temperament to be president and commander in chief of the United States.”