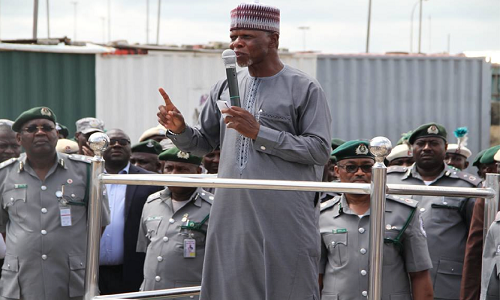 A Federal High Court sitting in Lagos has declined jurisdiction in the suit filed by Lagos based lawyer and Activist, Ebun Olu Adegboruwa, challenging the appointment of Col. Hameed Ali (rtd.) as Comptroller General of the Nigeria Custom Service.

Mr. Adegboruwa had in the suit filed in November 2015, sought the interpretation of the court as to whether the president could appoint anyone as comptroller-general of customs without complying with section 3 of the Official Gazette of the Federal Republic of Nigeria made on 25th March 2002.

The lawyer pointed out that the gazette stipulated that only those within the rank of Deputy Comptroller-General of Customs, could be elevated as substantive Comptroller General.

He, therefore, asked the court to nullify the appointment of Ali, as Comptroller General of the NCS.

But while delivering his judgment, the presiding Judge, Justice Sule Hassan, said Adegboruwa lacked the locus standi to file the case because he is not a member of the Nigeria Custom Service.

He also held that the president by the virtue of section 5 of the 1999 constitution has the executive power to make appointment.

The judge therefore struck out the case for lack of jurisdiction.

It would be recalled that President Muhammadu Buhari had broken away from tradition when he appointed retired Colonel Ali as Comptroller General of the NCS in September 2015.

Also, following the harsh criticism that trailed the appointment of the former Military Administrator of Kaduna State, the Presidency explained why it appointed him as Customs boss.