Nigeria’s House of Representatives has suspended a member of the House, Honorable Abdulmumin Jibrin. The decision to suspend Jibrin was announced by the House Committee of ethics and is in a new chapter in a long-drawn dispute at the lower house. 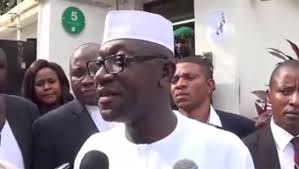 Hon. Abdulmumin Jibrin stirred the hornet’s nest after alleging that the Speaker of the House Of Representatives, Yakubu Dogara and other principal members of the house had padded the 2016 budget.

Abdulmumin Jibrin had served as the Chairman of the Appropriations Committee but resigned as he begun to make the allegations. He leveled several other allegations against the House leadership, all of which were refuted. Yakubu Dogara even threatened to sue Jibrin for libel.

The House Committee on Ethics and Privileges set up a committee to investigate the issue and invited Jibrin to appear before it. Jibrin refused to honor the invitation, claiming that the committee itself was tainted.

He has now been suspended for 180 legislative days for his refusal to honor the committee’s invitation.