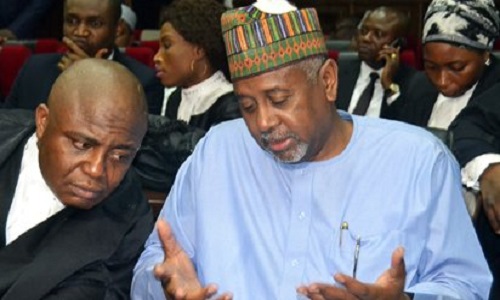 Embattled former National Security Adviser, NSA, Sambo Dasuki, on Wednesday left the Federal High Court, Abuja a dejected man after he was informed that continuation of hearing in his trial over alleged possession of illegal arms and money laundering, had been fixed for October 19.

Dasuki had earlier walked into the court premises about 10.45 am, accompanied by his lawyer, Ahmed Raji (SAN), confident of progress in the case which last hearing was on June 23.

The former NSA, who was followed at a distance by three security operatives, headed straight to the court room where his trial was due to resume.

However, the court was not in session as the presiding judge, Justice Adeniyi Ademola was yet to resume from his annual vacation.

Recall that Mr. Dasuki, a retired colonel, was arraigned by the Department of State Services (DSS) on a five count charge of illegal possession of firearms and money laundering in August 2015 after days of hide and seek between him and DSS operatives at his residence in Asokoro, Abuja.