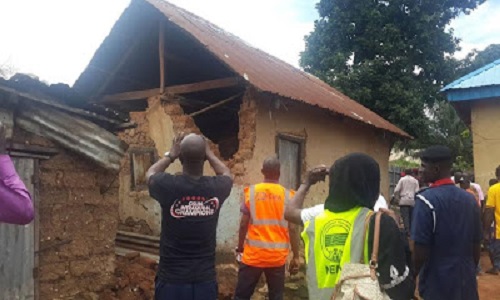 The National Emergency Management Agency (NEMA) said on Thursday that over 300 houses were affected by the earth tremor that hit Kwoi, Jabba Local Government Area of Kaduna State last week.

The agency’s Zonal Coordinator in the North West, Musa Illalah, made this known in an interview with the News Agency of Nigeria (NAN) in Kaduna.

Mr. Ilalah, however, said no life was lost in the incident, but that the affected houses either collapsed or got cracked.

“We have gone round and have seen the houses that were affected.

“The assessment is still ongoing; we are waiting for the geologists to tell us the root of the problem and what will be the next plan of action for the occupants of these communities”, Mr. Ilalah said.

He called on the residents to remain calm, saying that measures were already being taken by the Federal and State Governments to provide succour to the affected persons.

“We in NEMA will do our best; we are going to write our report and send it to the headquarters, Abuja.

“We all know that the rock is the root of the problem but only the geological services will be able to tell us the cause of the tremor”, he said.

It would be recalled that multiple earth tremors were recorded in three locations in Jabba LGA over the weekend.

The tremors that occurred on Sunday and early hours of Monday at Kwoi, Nok and Samban Dagi also left scores of structures with cracks or total collapse. (NAN)