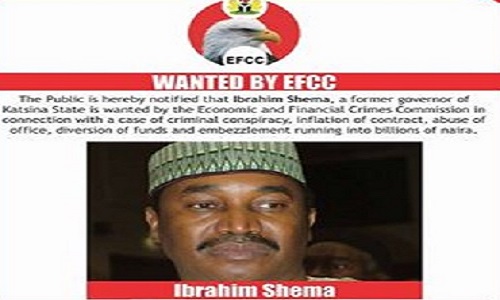 The immediate past Governor of Katsina State, Barr. Ibrahim Shema, yesterday alleged that he is a victim of political persecution.

Shema, who was governor of the North-west state from 2007 to 2015, is presently in custody of the Economic and Financial Crimes Commission (EFCC) in connection with the ongoing probe of alleged N74.6billion fraud.

He said he is also ready to defend himself based on the fairness, justice and the rule of law.

He, however, faulted Governor Aminu Bello Masari for advising him to go and defend his reputation.

Shema, who made his views known in a statement through the Head of his Media Team, Oluwabusola Olawale, said he should be charged according to the rule of law not political and media trial, which is presently the trend.

The statement said: “Our attention has been drawn to the statement credited to Governor Aminu Bello Masari in the media offering unsolicited advice to former Governor Ibrahim Shehu Shema on the need to defend his reputation.

“That has been our position since Governor Masari embarked on character assassination and witch hunting of Ibrahim Shema, we have said it several times that Shema should be charged according to the rule of law not political and media trial which is presently the trend.

“It is curious and surprising that more than a year that Governor Masari has been telling the whole world through over 100 radio, television and newspapers interviews that he has evidence to prosecute Ibrahim Shehu Shema of PDP, he has failed to prosecute and charge Shema to court of competent jurisdiction with his evidence yet he has pronounced Shema guilty of the offences through the media without trial.

“Governor Aminu Bello Masari further exposed himself and his hatred for Shema in his statement published on Wednesday, September 21, 2016 in some selected newspapers when he stated that ‘our advice to the former Katsina state Governor is that he should be manly enough to bear his cross without casting himself as an injured party innocent of the offences he wilfully committed’.

“With this statement, Governor Masari of APC has pronounced Shema guilty of offences without trial and we are leaving the rest for the public to judge”.

The ex-governor maintained his position that his current travails were nothing but political persecution.

“So far we have been vindicated that Shema is facing nothing but political persecution. This is further confirmed by the fact that the government is yet to charge Ibrahim Shehu Shema to court for any of the offences he was said to have committed despite more than a year of investigation by Governor Masari of APC by setting up over 13 different committees populated by APC card carrying members/even members of his cabinet”, Mr. Olawale said.