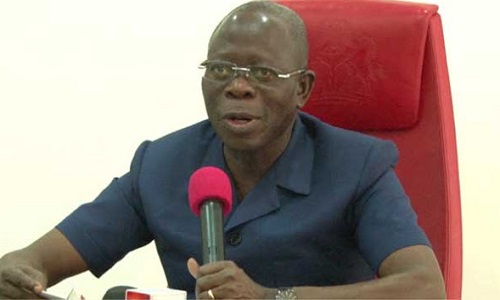 Governor Adams Oshiomhole of Edo State yesterday boasted that the Peoples Democratic Party (PDP) will suffer defeat in the September 28 governorship election in the state.

He hinged his belief of PDP’s defeat in the polls on the admission by handlers of the party that his All Progressives Congress-led administration in the state had excelled in the last eight years.

The rescheduled governorship polls has been predicted to be a two-horse race between Godwin Obaseki of the APC and Pastor Osagie Ize-Iyamu of PDP.

Oshiomhole, who spoke in Benin, the state capital while inspecting works on the on-going New Era Model School, said there was no need to return to the dark past when PDP was at the helm of affairs and nothing worked in the state.

“I’m glad that even our opponents had to concede that Edo is working and the task of taking the state to the next level must be sustained. This is why we have no apology when we say to our opponents that the choice in the election is between consolidating projects such as this and building more of these projects in different parts of the state, or returning to the dark era where everybody was buffeted with excuses”, he said.