Home Politics We Must Think Out Of The Box To Overcome Recession, says Buhari
Facebook
Twitter
WhatsApp 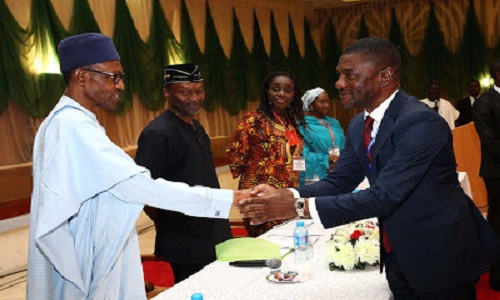 President Muhammadu Buhari on Thursday admitted that the current recession requires “out-of-the-box” thinking to deploy strategies that involve engaging meaningfully with the private sector to raise the level of private sector investment in the economy as a whole.

He stated this at the Banquet Hall of the Presidential Villa in Abuja at the ministerial retreat on the economy and the budget, with the theme “Building Inter-ministerial Synergy for Effective Planning and Budgeting in Nigeria”.

The president expressed optimism that the level of private investment would grow as his administration was determined to make it easier to do business in Nigeria by the reforms being introduced under the auspices of the Presidential Committee on Ease of Doing Business.

He said his government would continue to strategize on how to turn the current challenges into opportunities for the nation and “especially for our vibrant youth on whose shoulders lies the future of this nation”.

Buhari noted that this is the reason behind his administration’s decision to embark on measures and actions that will open up opportunities that have been identified in Power, Housing, Agriculture, Mining, Trade and Investment, Information Communication Technology (ICT), Tourism, Transport and other sectors.

He specifically assured the youth that his government would remain steadfast in its effort to ensure greater progress and prosperity for them.

President Buhari observed that over the years, there had been a mismatch between planned targets and budgetary outcomes at the national and sectorial levels, adding that “The Federal MDAs have not also benefited significantly from working together and building consensus around common national objectives. This has impeded growth and development of the country”.

“It is in this context that this retreat has been designed to discuss issues around the State of the Economy and build consensus amongst cabinet members and top government officials”, he said.

He said the retreat would also serve as an opportunity to have a general overview of the economy and discuss the framework for the 2017 budget, its key priorities and deliverables. 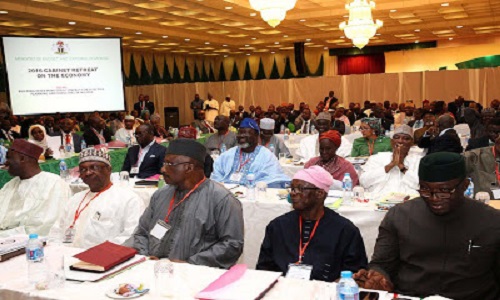 Mr. Buhari said the retreat was coming at a critical time in the nation’s economic history “when the Nigerian economy is in a recession, with significant downturn in performance in various sectors”.

“It is with regard to the importance of this retreat that I decided to sit through the first part of the session to listen to the views from experienced economists and development experts on how best to implement our plans to rid the country of its oil dependence and to diversify the economy and bring the country out of the current economic recession.

“This is in line with our administration’s determination to lay a solid foundation for growth and development as outlined in the Strategic Implementation Plan (SIP) of our Change Agenda.

“Given that this retreat is a lead-up to the 2017 budget, my expectation is that we will come out of the these sessions with a determination and common position on how to have improved synergy amongst the various Ministries and Departments for the effective formulation and implementation of the 2017 Budget.

“I also trust that the breakout sessions will enable you to discuss extensively amongst yourselves, the details of the four sub-themes and come up with practical solutions on the way forward in order to come out with a set of prioritized projects and programmes that will fit into the 2017 budget”.

The president stressed that in 2017, because of the need to focus on key priorities, “some ministries might get significantly less capital allocation than they received in 2016, while others may get significantly more”.

He continued: “You may notice that some key non-spending agencies, such as the Infrastructure Concession Regulatory Commission (ICRC), the Bureau of Public Enterprises (BPE), the National Sovereign Investment Authority (NSIA) and the National Pension Commission (PENCOM), are participants at this Retreat.

“This deliberate inclusion underscores the commitment of this Administration to leverage on private sector resources, through Public Private Partnerships (PPP) and other arrangements, in order to augment the scarce budgetary resources at our disposal and to accelerate investments in building critical infrastructure”.

He said while the government was taking the lead in the task of repositioning the economy for change, it could achieve this completely by itself.

“We will need, and we ask for the support and cooperation of the private sector’s domestic and foreign investors, the states and local governments, the National Assembly and the Judiciary as well as all well-meaning Nigerians in this important task. We are confident that working together, we shall succeed.

“Finally, I trust that the cabinet members will learn from the experiences of the Resource persons and facilitators to prioritise their sector programmes and projects to bring the country out of the current economic recession and place it on the path of growth and development.

“I therefore urge the Honourable Ministers and other senior government officials here present, to actively participate in the Second Technical Session, which I believe will provide you with deeper insight into the complex issues that will open opportunities for you to identify critical priority projects and programmes for the 2017 budget”, he added.

The president said he was confident that ministers and senior government officials would benefit immensely from the experts’ expertise and wealth of experience.

He wished all the participants fruitful deliberations, saying he looked forward to receiving the report of the retreat.