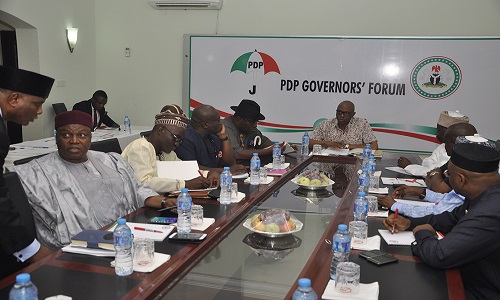 Governors elected on the platform of the Peoples Democratic Party, PDP, have raised the alarm over an alleged plan by the governing All Progressives Congress, APC, to rig the November 26 governorship election in Ondo State.

Speaking under the aegis of PDP Governors’ Forum, they called on President Muhammadu Buhari to direct the Independent National Electoral Commission (INEC) to be fair in the conduct of the forthcoming governorship election in Ondo.

In a statement by its Secretary, Patrick Okon, on Monday in Abuja, the forum also called for overhaul of the Prof. Mahmoud Yakubu-led commission.

“We are aware of the plan of APC to get Ondo state by all means, including enlisting the assistance of INEC.

“We are warning that we will not fold our arms to watch this impunity and day-time robbery.

“INEC is an umpire and should play its role very well so that the electorate will have confidence in it.

“From the way things are going, the people are already losing confidence in the commission”, it said.

The forum also called on INEC to stick to its electoral mandate and should not subvert the law of the land.

“INEC should conduct itself very well in this forthcoming Ondo state governorship election to avoid a repeat of what happened in Edo election”.

The electoral commission based its decision to clear Ibrahim, instead of Eyitayo Jegede, as the candidate of the PDP at the polls, on a court order

The development took majority of members of the party by surprise because Mr. Eyitayo emerged candidate of the PDP in a primary conducted by the Senator Ahmed Makarfi-led National Caretaker Committee and which was supervised by INEC, as provided in the Electoral Act.

However, the caretaker committee has the Court of Appeal to reverse the decision of High Court on the issue.

Hearing on the matter has been fixed for Tuesday and Wednesday in Abuja.