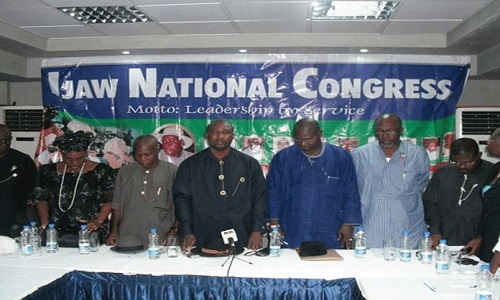 The Ijaw National Congress (INC) has expressed doubts about President Muhammadu Buhari’s meeting with elders and leaders from the Niger Delta slated to take place today, saying it may not resolve the problems of the region.

The INC President, Alatubo Charles Harry, expressed reservations about the meeting when he appeared as a guest on a radio programme in Port Harcourt, Rivers State yesterday.

He also spoke on the Federal Government’s plan to bring N10billion infrastructure fund to the region.

The INC leader tasked the Federal Government to implement reports of several commissions on the development of the region.

Harry said while the Ijaw ethnic group believed in Buhari’s meeting with the people, who came under the aegis of Pan Niger Delta Elders’ Forum (PANDEF), it would not produce the required results, as constituted bodies in the region were not carried along.

“We’re waiting to see something more solid, something more concrete. We have heard too much talks and seen less action. An ad hoc solution will always have ad hoc answer. The permanent bodies in the Niger Delta are the constituted ethnic nationality groups like MOSOP, INC and others. We believe we have confidence that they should go and discuss, if they so choose”, he said.

On the Federal Government’s plan to use force in addressing Niger Delta crisis, he said: “We don’t believe that the Federal Government is sincere with what it is doing; because, only two days ago, the Minister of State for Petroleum, Ibe Kachikwu, came up to say a new force is to be put together.

“We stand to wonder if they are really sincere about what they are saying.  How can you say, on Tuesday, say you would have discussion with elders and traditional rulers from the zone, and at the same, you are putting up a force that is going to tackle the issues militarily? There is inconsistency in terms of what they are doing”, the Ijaw leader stated.