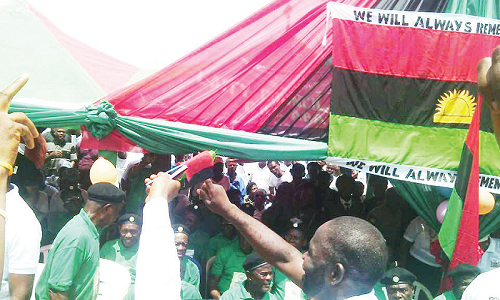 The Indigenous Peoples of Biafra (IPOB), yes­terday described as a welcome development, President Muhammadu Buhari’s comment that any Nigerian is free to leave the country if they have another one.

The president had on Tuesday, during a meeting with Niger Delta leaders at the Aso Rock Presidential Villa, Abuja, said “any Nigerian is free to leave the country if they have another one”.

He also stated that “If anybody has a country to go to, let him go, we will stay here and salvage our coun­try”.

The statement signed by signed by the group’s spokespersons – Emma Nmezu, a lawyer and Clifford Iroanya –reads: “We, the IPOB are delighted with the comments attributed to retired Maj-Gen Muham­madu Buhari, who seems to have bowed to international pressure to consider the in­evitable disintegration of Ni­geria, though with conditions we find inconsistent with common sense and logic.

“It is crystal clear that Buhari has seen the futility of fighting against a deter­mined people who are bent on restoring their God given nation which was unjustly robbed them by slave mer­chants later turned colonial­ists.