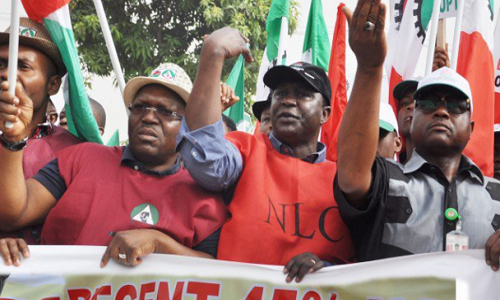 The Nigeria Labour Congress (NLC) has accused the Federal Government of dragging its feet on convening a meeting of the Committee on Minimum Wage.

The NLC General Secretary, Dr Peter Ozo-Eson, made the accusation in an interview with the News Agency of Nigeria (NAN) on Tuesday in Abuja.

Ozo-Eson said that the discussion of the review of the minimum wage was long overdue.

NAN recalls that the Federal Government had on June 3, set up a 16-man joint committee to work out palliatives and fashion out a new minimum wage to cushion the effects of the fuel pump price increase.

According to him, the meetings of the Committee on Palliatives have not produced any positive result.

He said: “It seems that government is dragging its feet and just using the committee meetings as a way of just dragging the matter.

“Specifically, with respect to the minimum wage, we, from the very beginning, have been very clear, that the minimum wage is not something that should be subsumed under the palliatives discussion.

“The minimum wage demand was made independent of whatever they did with oil price.

“The way forward for discussing the minimum wage is established.

“It is a tripartite framework that should be set up; the ILO Convention of fixing minimum wage fixing procedures is very clear on that.

“Therefore, what we are waiting for the government to do is to actually convene that tripartite committee”.

Ozo-Eson said that it was high time government convened the meeting by appointing a chairman with equal representatives from government, labour and private employers.

He said that it was only then that government, labour and private employers would begin the discussion of the proposed new minimum wage.

The NLC scribe recalled that the present minimum wage of N18,000 came out of such tripartite arrangement under Justice Alfa Belgore’s committee.

“Certainly, (the review) is already overstretched based on the underlining principle of understanding that the minimum wage ought to be reviewed after five years.

“So, it is clearly overdue for review and we think that there is urgency apart from the fact that the five years have passed.

“Today, N18,000 means nothing at all; cost of living has been going up and we know that N18,000 does not buy anything, just food alone today.

“So, the underlining parameters clearly require that we do a review and do such a review urgently”. (NAN)