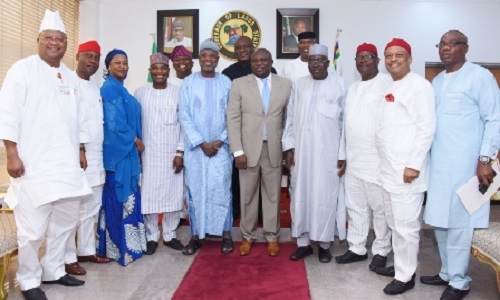 The Bill that sought to give special status and federal grant to Lagos State but which was rejected by the Senate, will be revisited, Chairman of the Senate Committee on Marine Transport, Sani Yerima, has said.

Recall that last month, Senator Oluremi Tinubu (APC/Lagos Central), sponsored a bill seeking one percent of federally generated revenue as special grant for Lagos State as well as a recognition of the state by the federal government as Nigeria’s commercial capital.

But the bill, which elicited an uproar on the floor of the senate during second reading, was vehemently opposed by other senators when it was put to a voice vote.

Speaking during a visit to Governor Akinwunmi Ambode on Tuesday, Senator Yerima (APC/Zamfara West), said everything must be done to support the state.

He was in Lagos alongside other members of the committee.

“Lagos is not only for Lagosians”, said Mr. Yerima, who is also Senate Minority Leader.

“If you look at Lagos, it has been the national capital and up till this moment, you find people from all states of the federation earning living here and so anything we do for Lagos, we are not doing it for Lagos alone and I will call Lagos a mini Nigeria.

“So, by the grace of God, we are going to look at the bill again”.

Receiving the senators at the Lagos House, Ikeja on Tuesday, Mr. Ambode urged them to support the bill, adding that its passage would translate to economic prosperity and well-being of Nigeria.

“If we have about 12 Senators here and we are looking for two-third, we are saying here that it would not be out of place to revisit our appeal and our bill”, Mr. Ambode said.

“Lagos is thoroughly cosmopolitan; it is a mini-Nigeria and then the wellbeing of Lagos is the total wellbeing of Nigeria and everybody has a stake here in Lagos and as a government, we have continually addressed the cosmopolitan nature of Lagos in a way that is suitable and comfortable for all Nigerians irrespective of tribe, creed or religion”.

While clarifying the essence of the bill, the governor said it only seeks one percent special allocation from the revenue accruable to the Federal Government.

“If we are able to do that, you can imagine what we would have done 25 years ago based on the understanding of gentlemen that Lagos would not be left behind or forgotten”, said the governor, who noted that December 12 would mark 25 years since the capital of Nigeria was moved from Lagos to Abuja.

“So, that is the platform we want you to try and help us to have a re-look, a re-think and then think more of Nigeria in the bill rather than of Lagos because that is what that one percent assistance will address and then tends to create the image of the kind of commercial capital we want Lagos to be”, Ambode explained.

The governor, who described the visit by the members of the Senate Committee as apt and timely, said it came just after he had fruitful discussion in Denmark on the development of $2.6billion Badagry Deep Sea Port, aside the ongoing Lekki Port, adding that it was a pointer to the fact that there is convergence of vision and mission to grow Nigeria’s economy.

Besides, Ambode justified the development of additional ports in Lagos, saying it was now obvious that only Apapa Port cannot meet the demand of commerce and expansion required by the State, and therefore solicited the support of the Senate in that regard.