6 Bedtime Snacks That Will Help You Sleep Like A Baby

Deolu
Taking Greek yogurt + raspberries and other listed snacks in this article will not only make you healthy, but also will help you sleep like a baby. 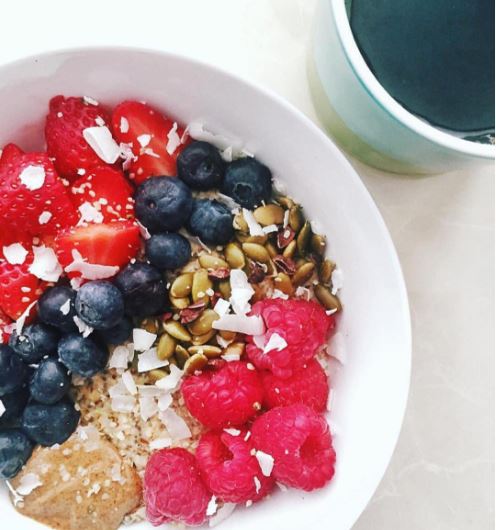 Are you looking for best snack you can eat and sleep like a baby? Look no further as according to Women’sHealth, these 6 bedtime snacks will help you sleep like a baby. Try it today!
1. Frozen berries + coconut milk drizzle
Seriously, this will give your pint of ice cream a run for its money. This snack is packed with healthy carbs (fruit) and healthy fats (coconut milk), which digest more slowly to keep blood sugar stable longer than processed carbs and sugars, says Schoenfeld.
2. Tart cherry juice
Tart cherries are rife with melatonin, a hormone that regulates your body clock. “There are few food sources of melatonin, but tart cherry juice is the one that has the most promising data behind it,” says Lori Zanini, R.D., a spokesperson for the Academy of Nutrition & Dietetics. In one small study, insomniacs who drank eight ounces of the juice twice a day for two weeks slept close to 90 minutes longer per night compared to those who drank the placebo.
3. Herbal tea + superfood mix-ins
Warm milk is out (because: yuck), but when you want something soothing before bed, brew a cup of herbal tea, like rooibos, says Schoenfeld. Then, add in a spoonful of honey (carbs) and a dash of cream (fat). Up the ante with hydrolyzed collagen powder, which is “a great source of the sleep-inducing amino acid glycine,” she says.
4. PB + whole wheat
Both whole-wheat bread and peanut butter are great sources of magnesium, says Zanini. “This major mineral helps relax our muscles,” she says. And being physically relaxed is half the battle. Plus, it’s a good idea to get more magnesium-rich foods into your diet to sleep well and be healthy, as most adults don’t get enough, according to Health.gov. To keep calories on the more snack-like side, aim for a half sammie and choose natural peanut butter that’s made only with peanuts.
5. Greek yogurt + raspberries
When your stomach grumbles late at night—listen to it! It’s saying you need food. It’ll be more difficult to go to sleep when famished, and you can wake up from hunger, too. To quiet tummy noises, Zanini recommends a half-cup of plain Greek yogurt with cinnamon and a half-cup of raspberries. The Greek yogurt provides some lean protein to amp up satisfaction. If you don’t do dairy, reach for almond or coconut yogurt.
6. A dessert smoothie
Feeling unsatisfied from your daytime eats? If you’ve got Oreos on the brain, whip up a nutrient-packed sweet smoothie instead. Zanini likes this combo: one cup unsweetened almond milk, one-half a banana, one teaspoon unsweetened cocoa powder, two teaspoons of natural almond butter, and ice. “It’s just enough to satisfy your hunger and sweet tooth, while still keeping it less than 175 calories,” she says. Major yum.
Source: Tori
Share
Facebook
Twitter
WhatsApp
Previous articleFUT Minna Shut Over Students’ Protest
Next articleMeet the US-based Nigerian Booty Queen Raking Heavy Dollars from Showing Off Her Backside | Photos
- Advertisement -