Bisola, one of the housemates in the on-going Big Brother Naija (#BBNaija) reality TV series on Tuesday said she looks forward to a “romantically oriented” task with her fellow housemate ThinTallTony(TTT) . 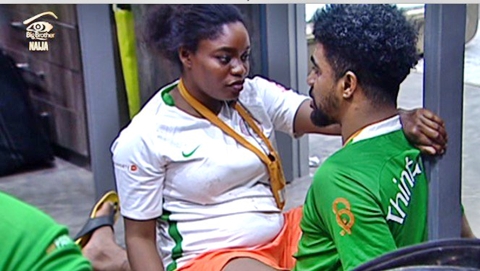 It would be recalled that the two housemates have been displaying affection for each in the house. The love birds have also received criticisms from viewers due to their explicit actions in the house.

Bisola said this during her diary session with “Biggie” owner of the #BBNaija house. When asked by Biggie “who among the housemates would you want to be tied with in a romantically orientated task,? She responded “Thin Tall Tony.”

Bisola explained that she was comfortable with TTT because he knows how to tolerate her excesses. “I can be little over bearing sometimes; I can’t play with other housemates the way I play with Tony; with Tony I can have fun.”

Bisola and TTT’s closeness keeps growing by the day.

Bisola who also spoke on Kemen’s disqualification from the show last Sunday expressed regrets for some unprintable comments she made about Tboss. She said her comments were based on what Kemen told the housemates.

“I said some unprintable worlds about her, but when she called me aside and told me what went down, I was like yooo! I felt really bad; I miss Kemen, I admired his drive, focus and the fact that he loves to help other youths. But on what he did; even if Tboss didn’t say anything or didn’t know what happened, as long as Big Brother saw it, it was enough for Big Brother to disqualify him. It was really bad, I was disappointed in Kemen for what he did; I didn’t know what pushed him, but I do miss him though,” Bisola said.

The housemate also said, she hoped the disqualification would not hinder him and his future plans. She also apologised to Tboss adding, “I like her, but just that sometimes she over does certain things in the house.

“And me, I have a big mouth and will just talk about it, but she thinks I don’t like her,” Bisola said.

On Uriel’s eviction, Bisola said it was shocking because she did not think Uriel was going to leave. According to her Uriel, who was evicted last Sunday, was the house favorite and always lending helping hands to other housemates when there was a need.

Earlier, Biggie who was in a prankful mood, ordered the housemates to freeze while some Ninja’s sprayed whipped cream over their bodies. The housemates who just finished having their bath were not too happy with the spray.