Rap goddess, Nicki Minaj has finally responded to Remy Ma’s viral diss tracks ‘Shether’ and ‘Another One’ with three no-holds-barred tracks of her own. 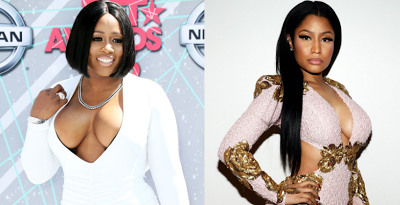 Reuniting with fellow Young Money members Lil Wayne and Drake for ‘No Frauds’, the Murda Beatz-produced song directly hits back at Remy Ma: “Tried to drop ‘Another One,’ you was itchin’ to scrap/ You exposed your ghostwriter, now you wish you were scrapped,” she raps.

‘Changed It’ also fires shots at Remy Ma, with Lil Wayne joining Minaj for the ride, while ‘Regret in Your Tears’ shows a more personal side of Minaj with a down tempo track that appears to explore the rapper’s recent breakup with Meek Mil.

The beef between Remy Ma and Nicki Minaj has been bubbling away for years now but came to a head in February with the release of Remy Ma’s ‘Shether’, an update to Nas’s Jay Z diss ‘Ether’ targeted at Minaj. A second diss track, ‘Another One’, followed a few days later.