Governor of Ekiti State,  Ayodele Fayose, has called on the Federal Government to increase the monthly allowance of the National Youth Service Corps members in view of the current value of the naira. 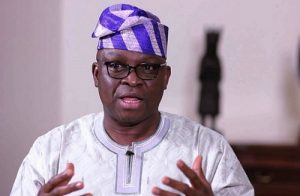 He made this call during the swearing-in and official opening ceremony for the 2017 Batch ‘A’ Stream I of the NYSC at the NYSC Orientation Camp, Ise/Orun/Emure Ekiti.

The governor, who was represented by the Secretary to the State Government, Dr. Modupe Alade, stressed that the N19,800 monthly allowance was no longer sufficient for the survival of corps members, adding that a review of the allowance must be given an urgent attention by the Federal Government.

The governor, who recently provided hostel and toilet facilities for the NYSC Orientation camp, reiterated his commitment to the well-being of corps members serving in the state and promised to give further assistance to the NYSC.

Fayose lamented that the monumental increase in the population of graduates annually without corresponding development in the facilities had led to huge infrastructural decay in the NYSC camps nationwide.

Urging the corps members to render outstanding services to the state and their host communities, Fayose gave the assurance that the state government would continue to acknowledge and reward deserving youths with state honours award, automatic employment and cash gifts.

He encouraged them to go into farming, fishery, snail farming and to tap into the agriculturally-friendly environment of the state, emphasising the need for them to take advantage of the pleasant, accommodating, peaceful and hospitable atmosphere in the state.

The state Coordinator, NYSC Ekiti State, Mrs. Nwano Eze Ukgha, who put the number of youths registered in the new batch at 2,066, warned the corps members against indulging in cult activities, consumption of illicit drugs, and other forms of unwholesome acts in the camp as erring members would be handed over to the camp court for trial according to the NYSC by-laws.