The Oyo state government has inaugurated a seven-man judicial commission of inquiry for the review of the Olubadan chieftaincy declaration and other related chieftaincies in Ibadanland.

A statement released on Friday by Yomi Layinka, the spokesperson to Oyo State Governor, Abiola Ajimobi, said the commission would be headed by a retired High Court judge, Akintunde Boade.

According to the statement, the commission was inaugurated by the governor at the Executive Council Chambers of the Governor’s Office, in Ibadan, on Friday.

It was given four weeks to submit its report, Mr. Layinka said.

Others are Messrs Joseph Oladele, Paul Ayoola, Ogunniyi Ogunjinmi, and Abiodun Adegbaye, while the Director of Chieftaincy Matters in the ministry of justice, Olanrewaju Jaiyeola, will serve as the secretary.

The statement explained that the commission was saddled with the responsibility of “reviewing the existing requirements and qualification for ascendancy to the throne of Olubadan, as well as to review the selection process of Olubadan from Otun and Balogun lines.

“(It was also mandated) to look into the possibilities of having more beaded crown Obas in Ibadanland, taken into consideration the present size and population of the city,” the statement said.

“(The panel is also expected) to review the existing 1957 Declaration of Olubadan of Ibadanland in line with the proposed change in chieftaincy institution in Ibadaland.”

In an address at the occasion, Mr. Ajimobi said that the review was long overdue, considering the fact that the existing declaration made in 1957 was no longer in tune with the current reality and modern trend in Yorubaland.

“The primary purpose of this commission is to facilitate the development, modernisation and effectiveness of our traditional chieftaincy system in Ibadanland in particular and across the state in general,” the governor said.

“Similar exercises will be instituted across the state in order to create the enabling environment for active contribution of our traditional institutions to the socio-economic development of our state.

“It is reassuring to note that the membership of this commission is made up of people of an enviable track record of integrity, patriotism and impeccable character who have excelled and continue to excel in their respective fields of endeavour.” 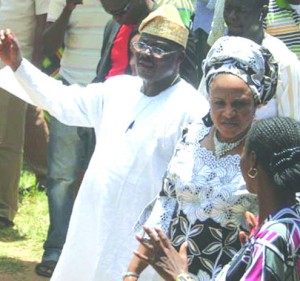