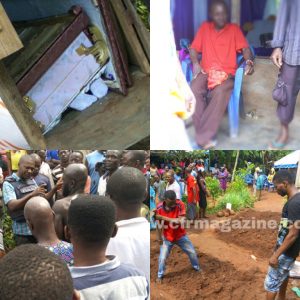 There was a bit of confusion in Ukpor, Nnewi South LGA, Anambra State, yesterday, after a burial ceremony was violently interrupted over some unresolved issues.

According to an eyewitness, the man responsible for the drama married two wives but had issues with the first wife before she died 3 years ago. Because of the existing issues, he refused to bury her and abandoned her in the mortuary.

She was still in the mortuary when the second wife died. The man, however, made plans to bury the second wife. He communicated his decision to the villagers but was strongly opposed by the elders.

They informed him that according to Igbo tradition and custom, he was supposed to bury the first wife before the second wife, but he ignored them all and scheduled the burial ceremony for yesterday, 23rd June 2017.

However, the relatives of the first wife caught him unawares by going to the mortuary to retrieve the corpse of the first wife and stormed the burial ceremony to lay their late sister to rest during the lying in state of the second wife.

They proceeded forcefully to the grave meant to bury the second wife but were strongly opposed by the man and his relations and it resulted in a free-for-all fight. One of the coffins ended up being thrown on the floor.

The relatives of the first wife eventually overpowered them and successfully buried their late sister. The members of the Nigerian Police force were later mobilized to the scene.

The DPO immediately called the two parties together for peace. In the end, he directed the relatives of the first wife to dig another grave so that the second wife could be buried as well.