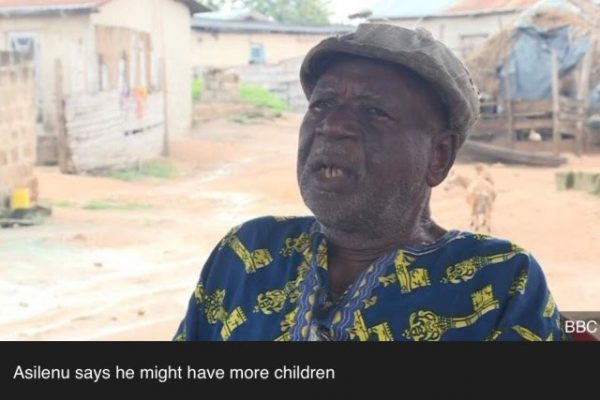 Yesterday was World Population Day – and one man in Ghana has 100 reasons to mark his particular contribution. Kofi Asilenu, 80, is the father of 100 children by 12 wives.

He lives with his family in a village called Amankrom, a 45-minute drive from the capital Accra. His family make up a third of the 600 people in the village.

He told BBC that he wanted a big family because he did not have siblings: ”I don’t have any brother or uncle, that’s why I decided to have many children so that they can give me a befitting burial when I die. In my home town if you give birth to one child they will say you are not important so I want to have many children.”

Asilenu says he might have more children. His big family has, however, come at a cost. He says that he was well off financially, but his resources have mostly been drained due to the cost of raising such a large brood – even though he says now he gets financial help from his children.

Kofi Asilenu looks physically strong and even says he is willing to have more children – despite having mistakenly proposed to one of his daughters three years ago. The embarrassing incident meant he was forced to apologise to her, explaining that he had an eye problem so he could not recognise her.

As for his wives, they are all happy with the set up. First wife Nayome Asilenu told the BBC: When I married my husband and he decided to marry more women, I didn’t have any option. He’s able to take care of us, pay the children’s school fees. They are healthy and strong so there’s nothing wrong with that.”