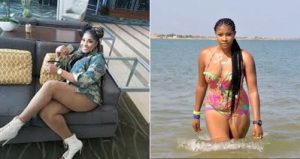 Nollywood actress, Angela Okorie has claimed in an interview, that no man sponsors her luxurious lifestyle.

Recently, Angela Okorie has been having the time of her life, having vacations in lovely destinations, building houses and purchasing exotic rides.

This has made some people insinuate that she has a “big man” sponsoring her lifestyle.

The pretty actress in an interview with PUNCH, claimed that she is one sponsoring her luxurious lifestyle not one big man.

“It is very annoying and insulting to say that a man must sponsor me before I can travel out of the country. Before I came into the movie industry, I was a model and singer and I was making good money from that. Even as an actress, I have appeared in a lot of films and my services are still very much in demand. I am also involved in some other things as well. For anybody to now say that I’m living off anybody is the height of being dumb. Everything I am today is by the grace of God and my sweat. I am a very hard-working and independent person. I know what I want and I constantly go for it. I don’t need anybody to sponsor me,”