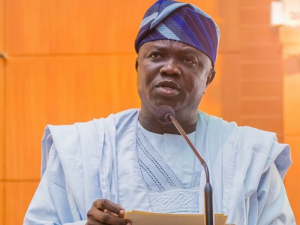 The Lagos State Government on Monday has begun the reconstruction of the International Airport Road, Oshodi, pledging that the project would be ready in 15 months.

Governor Akinwunmi Ambode had last month at a quarterly Town Hall Meeting in Ajah announced that work on the  road would commence in September.

The Commissioner for Waterfront Infrastructure Development, Adebowale Akinsanya, at the inauguration of the project, said the government was committed to transforming the area, being the major gateway to the country’s commercial nerve centre.

He said the state government decided to reconstruct the road because it is one of the busiest roads in the state with vehicular volumes averaging 50,000 vehicles daily.

The commissioner said the poor state of the road was not acceptable for the status of the state as the fifth largest economy in Africa.

He said, “Some of the fences along the corridor have been identified to be within the right of way. However, government will minimise the impact of the project on property owners.”

He said in order to properly carry along people of the area, a stakeholders’ meeting would hold on Thursday.

Akinsanya said, “Three groups of workers will work on the project and they will work day and night. Upon completion, the project will be linked to the Oworonshoki reclamation project, which is also ongoing. All these are aimed at transforming the corridor to a major entertainment and tourism hub.”

The commissioner urged residents and motorists to cooperate with government, saying that the project was for the benefit of everybody.

He said, “There will be some inconveniences, but we are going to mitigate the impact. The work will be accelerated. The project is to make life easier for everybody.”

The Managing Director of Planet Projects, the firm that designed the project, Mr. Biodun Otunola, said adequate feasibility studies had been carried out.

He said although there would not be alternative roads created specifically for the construction, the project would be executed in phases.

He added that motorists would make use of other sections of the road during construction work on a particular section.

Otunola said, “The desire of the government is to ensure that this whole corridor is turned into an international corridor so that investors and the people will see that we have an international gateway everybody can be proud of.”