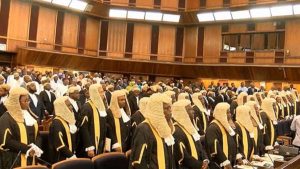 15 panels have been set up by the National Judicial Council, under the chairmanship of the Chief Justice of Nigeria, Walter Onnoghen to probe two state chief justices and 13 other judges who have all been accused of misconduct.

The panels will investigate various allegations in the petitions written against 15 Judicial Officers, including two chief judges.

The council decided after considering the reports of the two Preliminary Complaints Assessment Committees, on 46 petitions written against judges in the federal and state judiciaries, a statement signed by Soji Oye, director of Information of the NJC, said.

The statement, however, did not give the names of those being investigated.

But it said the council dismissed 31 petitions, 29 of which it found to be without merit. The remaining two written against Justice J. T. Tsoho of the Federal High Court and Justice O. O. Akeredolu, Acting Chief Judge of Ondo State, were withdrawn at the instance of the petitioners.

Al-Sagr National Insurance Company which wrote against Mr. Tsoho withdrew his petition since the judge had delivered the ruling in this case.

The statement said the council considered and found worthy of further investigation, the petition written by Azi A. Phillip on behalf of All Farmers Association of Nigeria, Plateau State Chapter, accusing Justice P. D. Damulak, the immediate past Chief Judge of Plateau State of bias, for failure to make his judgment in Suit No. PLD/J/236/16 delivered on November 4, 2016, available to him till the time he wrote the petition.

The council said it, however, decided not to constitute an Investigative Committee to look into the matter, because the accused judge had already retired from service and was therefore no longer in the employment of the National Judicial Council.

In other cases, the council considered and dismissed petitions written against two other judicial officers for lack of merit. The judges are L. T. C. Eruba – High Court of Justice, Abia State; and Grand Kadi Abdullahi Waiya – Sharia’h Court of Appeal, Kano State.

It also decided to issue two letters of advice to Justice M. A. Dada of the Lagos State High Court of Justice and Justice Chukwudi Charles Okaa of the Anambra State High Court for violation of extant laws in the course of their judicial duties based on petition written against their Lordships by Dayo Adamolekun, Esq. & Ridwanulah Olanite, Esq. And Reverend F. U. Ekavhiare & Associates respectively.

The council agreed to report Adesina Ogunlana, Esq., to the Legal Practitioners Disciplinary Committee (L.P.D.C.) for misconduct, for the use of uncouth language in a petition written to the National Judicial Council against Justice O. O. Atilade, the immediate past Chief Judge of Lagos State.

The council welcomed as good development, a letter from Zamfara State Government approving the recommendation of the National Judicial Council for the compulsory removal of Justice Musa Anka from office for receiving a bribe of N200,000 from Zubairu Abdumalik to deliver judgment in his favor.

The recommendation was made to the Zamfara State Government by the council in 2011.