Kiss Daniel might be in trouble soon for floating his own music label Flyboy Records – The Yeba singer has left his former music label G-Worldwide under which he released many hit songs – His ex-label mate Sugar Boy tweeted about the looming trouble but a fan of Kiss Daniel will not have any of this G-Worldwide act, Sugar Boy, has hinted that Kiss Daniel is in trouble for floating his own record label but a fan of the Yeba singer lambasted him.

But Sugar who is also on the G-Worldwide label with Daniel before he left seems not to be too happy with his leaving. He took to his Twitter handle to reveal that the Yeba crooner is in trouble over his move. 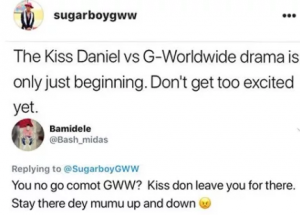