Home News Feed Technical Hitch, System Error Gifts NYSC Members Multiple Allowances
Facebook
Twitter
WhatsApp
Corps members have been thrown into dilemma on whether to initiate a refund or not, following a system failure in the payment system, which gifted multiple allowance payments to many of them while depriving others of theirs. 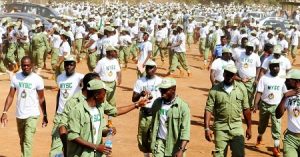 Following a system failure and technical hitches in the payment system, members of the National Youths Service Corps (NYSC) across the country were gifted multiple allowance payments while depriving others of theirs which has caused confusion.
It was gatheted that some Corp members who started receiving their monthly stipends were surprised when they got multiple credit alerts, some up to four times, for only October payment.
Some of those those who passed out last Thursday, November 2, got as much as N164,000 instead of the usual N41,000, while others who are still serving received as much as N79,200, instead of 19,800.
While speaking to The Nation, sources from NYSC office across the country, disclosed that a good number of Corp members have been waiting in vain for their allowances.
“I usually get my allowance through a new generation bank. We were told to expect payment of our allowances before our POP (passing out parade) but we did not get it.
“But on Monday evening I received a credit alert from my bank for payment. It was for N41,000. As I was rejoicing over the payment another one came in,” a source who asked not to be named told a reporter. The source would later get two more alerts which swelled his account by N164,000.
Meanwhile, the same former corps member’s fiancée who served in Owo, Ondo state, was yet to receive hers, 48hours later, at the time of this report on Wednesday afternoon.
Although the NYSC was yet to make a statement on the development, a letter allegedly sent my an official of one of the affected banks on Tuesday night appealed to beneficiaries of the ‘largesse’ to return the excess payment.
The letter read: “As you may have noticed Due to a little hitch and technical error of our automated FTDS (fund transfer and dispensing system), some Corper were paid twice and others even up to x4 of usual 19,800 monthly allowee. While others haven’t received.
“Please Nysc is a scheme that test not just your academic qualification but also a test of your character, so we want to use this medium to appeal yo those that were paid allowee twice or thrice to please return the excess so we can pay those that didnt receive, pls let’s be our brothers keepers.
“We at the bank we are still trying to collate the names of the corpers who were paid more than once so we can trace ther files at the headoffice., and see their house address to retrieve the excess money back. Please be patient as we await approval from our GMD so we can kickstart the process,” the alleged letter concluded.