Home News Feed Buhari Has Failed To Assure Nigerians That Both Herdsmen, Us Can Live...
Facebook
Twitter
WhatsApp 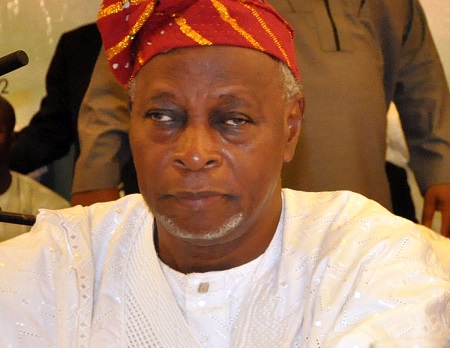 Chief Olu Falae whose farm located in Ilado, in Akure North area of Ondo State, was set ablaze by Fulani herdsmen, has said on Monday that he was disappointed in the silence of President Muhammadu Buhari on the rapacious activities of killer herdsmen in the country.

According to Vanguard, the former Secretary to the Government of the Federation, made the disclosure while addressing newsmen after government officials and the state police commissioner, Olugbenga Adeyanju visited his burnt farm.

The influential politician declared that he would resist all intimidated and harassed by the herdsmen to drive him from his farm of 32 years, saying “my farm has been destroyed five times within three years and it’s a deliberate means to probably kill me, run me out of business and away from the farmland which is not possible.”

The former Finance Minister equally said that “there shall not be cattle colonies in any part of Yorubaland. It’s a fraud.”

When asked if he was not worried by the silence of the President on the activities of the herdsmen, he said “it is only President Buhari who can answer the question why he is silent over these Fulani herdsmen atrocities.

“I have expected him for over two years to take an initiative and make a national broadcast to his people in Nigeria and assure us that he will handle the matter by announcing effective measures that could control the rapacity of the herdsmen.

”He has failed to assure Nigerians that both the herdsmen and us can live together in peace without one side damaging the other. I am disappointed I’ve not heard this from him.

“If I were President I would have taken the initiative because this is not a problem that cannot be solved many nations have gone through this, this mode of cattle rearing is universal but in the last hundred years most nation’s have solved the problem by adopting ranching

“Ranching in cattle farming and a legitimate and very profitable business run by private businessmen but they are trying to make my crops to feed their cattle to subsidise their own business because they are forcing me by invading my farm in the night to supply free food to their cattle and when they sell the cattle they don’t give me part of the money.

“This is a system that cannot survive and I expected the govenment to have stopped it, we are not saying cattle rearing should be stopped, but the cattle rearers should be assisted to set up or do their business without hurting anybody. Hurting farmers is not acceptable

”What they did to my farm is not a question of cattle eating grass; it is a matter of people destroying other people’s means of livelihood consciously, maliciously and deliberately.

“They set the farm on fire overnight and did it one after the other. They burnt them, why? Cattles does not feed on palm trees; they just want to destroy my assets. This is an attack on my livelihood, on what I possess. It is continuous, they do it every year. For the agriculture people, this is an attack to our food production.

“People are afraid now to plant, they do not have guaranteed that they would not destroy it. They have destroyed my ten hectares of cassava. Whoever borrows money to plant now; the asset will be ruined.

“I thank God that the road that divide the plantation and with the help of those who were in the farm yesterday night, they were able to prevent further damages. They limit the spread. The intention is what worries me; that some Nigerians deliberately want to destroy properties of other Nigerians.

“The destruction does not enhance their well-being. If they drive the cows to eat my maize and destroy my assets, it enhances their assets using it to subsidize their cows. But when they burnt my plantation, there is no rationality except malice and hatred.

“I will try to contain myself because I am provoked. You know Nigeria was a colony; through the efforts of our leaders, we were able to get the British to leave and we are free. A colony is a territory that is a dependent territory; more or less own by another nation. Thank God, since 1960 we are no longer a colony.

“In Nigeria, to mention the word colony has political connotation not economic. A colony is a political entity which someone said he wants to create in the territory of another; that is a provocation; that is terrible thing for anybody to contemplate. I am sure it was a mistake; I hope my friend Audu Ogbeh will withdraw that obnoxious policy.

“In any case with what is going on, I can tell you as a leader of our race, the Yoruba people will not concede one inch of its territory as a colony to another person.”