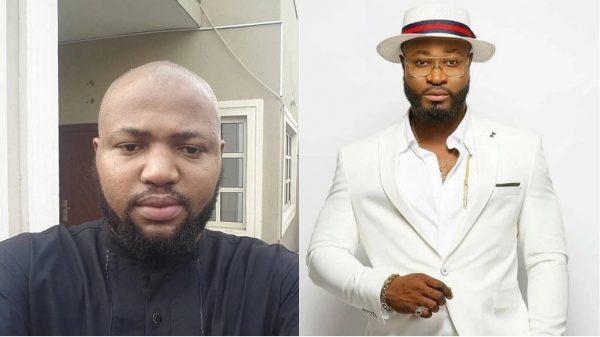 Harrysong’s former manager, Kaycee Ichie Oguejiofor, who took to Facebook to state that the only memory he has of Harrysong is being greedy after report of the singer’s depression session went viral, has maintained he won’t retract his statement but will only apologize for its timing.

Nigga when you die, the only memory of you I will have is greed! greed!! and greed!!! None of the homies around you made a living off you.No one got in equal strength what they put in and sacrificed.

Only people who stick around you are those who steal from you.
When you die we will only tell stories of the sadness you brought to us. NONE of your DAY 1s! is still riding with you.

If you die, I will sit in the bar and tell stories, sad stories of how ungrateful and disloyal you were to everyone who helped you build your dream.

However following the backlash he faced over the statement, Kaycee Ichie Oguejiofor disclosed that the Harrysong brand is what he has been part of from day one and will never wish the singer death. According to him, the post was made before his depression story was made public.

First of all, I am not writing this because of the public backlash, I do not expect anyone to take sides with me.
The post I made, was made 4 days ago in response to his “if l die” on Instagram before he went public with his depression case.
It’s rather unfortunate bloggers copied it without actually stating facts, and referencing his original post.
The Harrysong brand is a brand I was part of from day one, and regardless of whatever is happening between us right now, I got nothing but love for the homie and will never wish him death.
I will not retract my statements but will only apologize for the timing. People might look at me as insensitive and all, but I do not care sincerely about your opinion of a story you know nothing about.
Just for the record, the post was made public before his depression was made public. 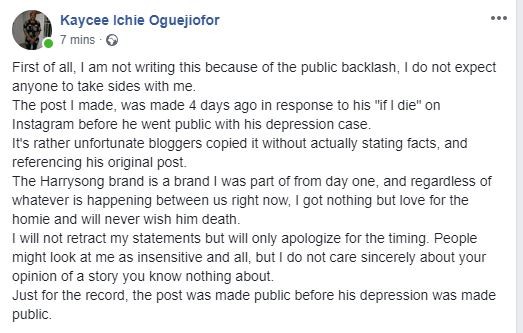