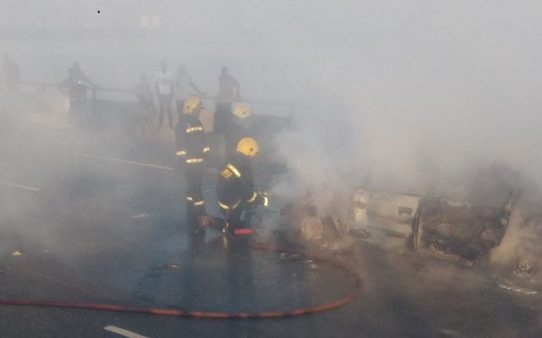 No fewer than 50 people died in a pipeline explosion in Umu Nwankwo, Umuimo Njiko Umunna and Umuaduru communities in Osisioma LGA of Abia State Friday.

The explosion was reportedly from an old NNPC pipeline which supplied PMS from Osisioma depot to Enugu and Kaduna through Umuimo and Umuaduru.

Witnesses say some members of the community who were able to identify their dead relations evacuated their bodies before the arrival of security agents, while some of the injured victims were said to have been taken to an undisclosed hospital, Daily Trust writes.

Chuks Benson Uzoije, a native of Umu Nwankwo of Umuimo in Njiko Umunna, Osisioma, a pipeline guard who works with UTM Offshore Limited, said:  “Yesterday, as we were on duty around 8pm, we got information that there was leakage on the line. All the surveillance gathered and started calling the people in-charge from Port Harcourt to Kaduna,” he said.

“They told us that government was not doing anything with the old line,that the attention of government was on the new line. They said government didn’t pay them to repair the two lines unless government wants them to renegotiate their terms of contract. For over three years, the old pipeline has been bad and it’s long they carried repair works on it.”