Ghanaian rapper, Stonebwoy, has denied claims of being arrested and handcuffed after he pulled a gun on a fellow musician, Shatta Wale, at the VGMA Awards which held last night. 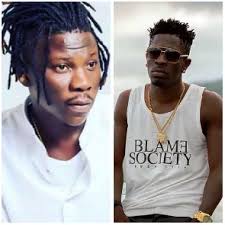 Stonebwoy took to social media to clear the air on news flying around that he was in police’s custody, after pulling out a gun on stage.

The rapper stated that chaos at the Awards was brought under control when the Ghana police intervened.

The rapper who also revealed that the police team ensured his safety till he got home, also thanked them for their service.

Kindly help Me Thank The Ghana Police Force..For Keeping Situations Calmer And At All Cost ENSURED My Safety Up Until I Entered My Gates. I WAS NEVER Arrested Whatsoever As Some Media Reporters Have It!! Thanks to The Counter-terrorism Commander And His Team..