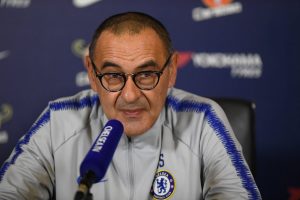 Maurizio Sarri has departed Chelsea for Juventus on a three-year contract after just one season with the London club.

The Italian tactician led the Blues to an unprecedented Europa League triumph by thrashing fellow English club, Arsenal, by four goals to one.

His exit from the club is expected to pave the way for Chelsea legend, Frank Lampard, as head coach.

Lampard currently manages championship side, Derby County, and he has been reluctant to put pen to paper on a new deal.

The former midfielder is expected to be unveiled as the new Chelsea coach in the next coming weeks.