World number 2, Rafael Nadal has beaten Roger Federer in the Semi-Finals to reach French Open finals has Federer gets his worst Grand Slam defeat in 11 years. 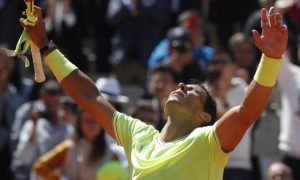 The 33-year-old Tennis player had a world-class performance as he gets pass Federer 6-3, 6-4, 6-2 in the four on court Philippe Chatrier.

Rafael Nadal will be up with either world number one Novak Djokovic or Dominic Thiem on Sunday.

This will be Nadal’s 12th record French Open Title in the championship match if he does not lose.

ALSO READ: “If they want me to go over there, they’ve got to give me $50million” – Andy Ruiz Jr Gives Conditions For Rematch With Anthony Joshua