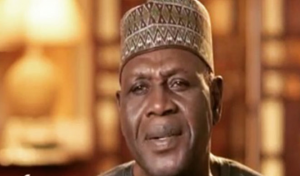 Babagana Kingibe, Abiola’s running mate during the June 12 election, has accused former President Olusegun Obasanjo of being culpable in the annulment of the June 12 presidential election.

Kingibe made this known during a live television programme on Nigeria Television Authority(NTA) in the early hours of today.

“In the aftermath of the annulment, one of the architects of the annulment, former President Olusegun Obasanjo tried to get some elder statesmen (former presidents and so on); I think of the African Leadership Forum to see how the aftermath of the annulment could be addressed or to see how the problems arising from the annulment could be addressed.
“And I think President Muhammadu Buhari did attend the meeting once, the inaugural meeting. I understood that when he (Buhari) saw the direction of the meeting, he decided not to attend again.
“Every time the issue of the annulment came up over the years, his position was very clear; it was very firm that the election was free, fair and there was a clear winner. And that the annulment was unjustified.
“So, having had the opportunity, perhaps, to right the wrong, I won’t be surprised he did so because it is in his character to try and do justice, however, belated and under whatever the circumstances.”
Asked if he was surprised by the declaration of June 12 as  Democracy Day, Kingibe said: “In a way, yes. I was surprised more by the timing of it than that it happened.
“I was actually on lesser Hajj in Saudi Arabia when the announcement was made. I was not surprised that it was made because I knew President Buhari felt strongly about June 12.”