A young Nigerian lady named Abimbola Ayanwale Modinat has reportedly been killed after she was stripped naked by suspected criminals and shoved out of a moving commercial bus at Idi-Iroko, Anthony Village, Lagos state on Tuesday, June 11, 2019. 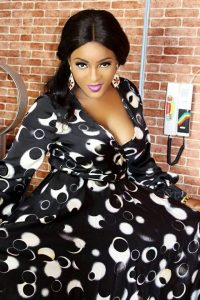 Surveillance footage revealing the shocking moment has been retrieved. According to reports, Abimbola allegedly went out after she received a call around the hours of 8 pm on Monday, June 10, 2019. She, unfortunately, did not make it home safely back as she had entered a bus packed with suspected criminals.

According to her friend, they believe Abimbola was deliberately killed by someone who knew her because none of her possessions were touched, neither was any of her body parts missing. The source also claims that her hands and legs were bounded together, and she was also shot before being shoved out of the bus.

The incident has been reported at the Anthony Village Police Station and her body has been taken out of the area by the police and deposited at Lagos State University (LASUTH) mortuary. The shocking moment was also captured at around 10:45 pm by the CCTV of a shop close to the Maryland Mall where Abimbola Ayanwale’s body was dumped.

A relative of the deceased identified as Adegoke Adekemi has since taken to social media to mourn her. She shared photos of late. Abimbola with the words;

“Auntie mi Modinat; you were still active on WhatsApp till 8p.m. on Tuesday. Only for us to be called around 11p.m. that you’re dead! How do these things happen? One minute, you’re healthy and bubbly, the next minute, you were called by someone. We are missing you already. You went to work, returning and you were shot to death! It’s a wicked world! My heart is just about to explode. I can’t wrap my head around this. Rest in peace Aunty mi. We will miss you dearly.” 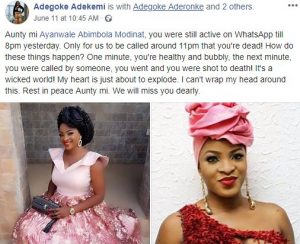 Watch the moment her body got thrown of the car;