In a video making rounds on social media, an unidentified man planned a fake wedding proposal to humiliate his girlfriend in the presence of their friends. 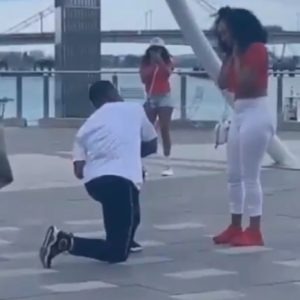 The man revealed that the lady seemingly told her friends that he gave her oral sex while she was on her period. This did not go down well with him as he decided to pull the stunt on her.

In the video, like an everyother marriage proposal, the man is seen down on one knee with his hand going straight into his pocket as if he wants to bring out a ring.

The girlfriend looked so surprised and excited as he mouthed the words,

However, instead of bringing out a ring, he brought out a middle finger which is a hand gesture that means “f*** you”.

The friends couldn’t help but scream in disbelief.

The woman was shocked and upset as she shouted at the man saying,

“That’s what you get for telling your homegirls I ate you out on your period.”