Celebrity fashion designer, Yomi Casual, has taken a swipe at 2019 BBNaija first runner up, Mike, for saying if his wife does not follow him to an event then he is not going.

Yomi Casual while reacting to the reality TV star’s post on social media said clearly he is not hungry for making such comment.

Read Also: The Way Mike Is Being Hyped For Being Faithful Shows How Damaged We Are; Actress Kemi Lala Akindoju (Photo)

He further queried if it is necessary for wives to follow their partners to all private appointments especially when it involves top personalities. 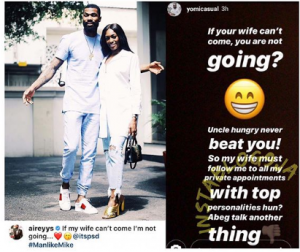