DMW boss Davido has dished out a piece of advice to all single men, one advice that has gotten many talking on social media.

The singer advised these men on how to comport themselves in a sexual relationship.

According to the father of three; “To all my single niggas out there .. Don’t try to fuck her, make her want to fuck you … #Freegame.”

He added that the advice doesn’t apply to ”married” men like him. 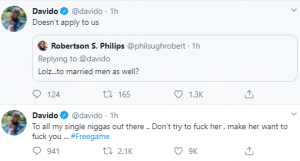