Daughter of former Oyo State Governor, Kemi Olunloyo has issued a strong warning to popular Nigerian singer, David Adeleke popularly known as Davido that he should not fly private jet for the next six months.

Olunloyo advised the multi-award winning singer to do commercials for the time being.

She made this known via a post on her official Instagram page on Saturday without stating the reason for the warning. 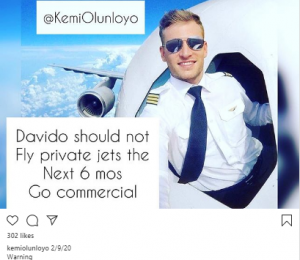