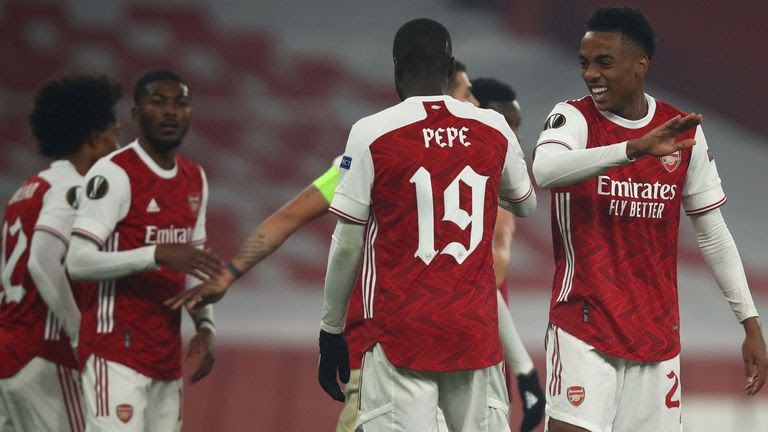 Arsenal overcame an early scare to continue their perfect start in the Europa League with a 4-1 victory over Norwegian side Molde at the Emirates Stadium.

Martin Ellingsen’s long-range effort gave the visitors a shock lead in the 22nd minute, but Arsenal, after a rather disjointed first-half performance, were back on level terms just before the break thanks to Kristoffer Haugen’s own goal (45+1).

The turnaround was complete in the 62nd minute as substitute Sheriff Sinyan also turned into his own net, before Nicolas Pepe (69) and Joe Willock (88) added the gloss to the scoreline for Mikel Arteta’s side.

It’s three wins from three in Europe now for the Gunners, who move three points clear of Molde at the top of Group B as they race towards qualification for the knockout rounds.

After a slow start, the game eventually burst into life when Bernd Leno’s clearance quickly found its way back into the Arsenal half. Magnus Wolff Eikrem swept the ball into the path of Ellingsen, who beat a frustrated Leno from 25 yards.

Despite dominating possession, the Gunners were struggling for rhythm and they were not really testing goalkeeper Andreas Linde, but they should have drawn level when Eddie Nketiah poked home Pepe’s low cross. However, the flag was raised for offside against Willock, but it was the England U21 striker who got the final touch.

Arteta’s side did eventually draw level in first-half stoppage time as Granit Xhaka led a counter-attack. He played the ball forward for Nektiah, and his cross in search of Willock was turned into his own net by Haugen.