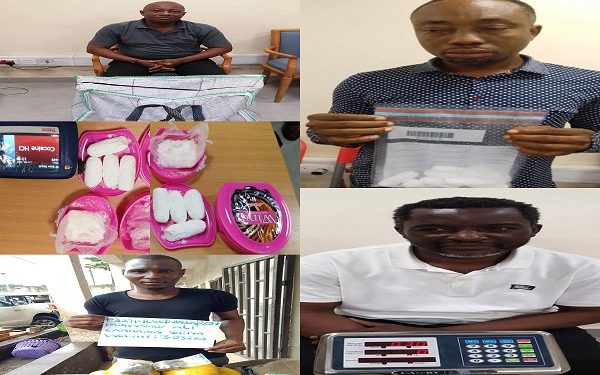 An Uber driver has been arrested by operatives of the National Drug Law Enforcement Agency (NDLEA) with cocaine at the Murtala Muhammed International Airport (MMIA), Lagos.

The agency’s spokesman said the Uber driver, Lawal Tunde Rasheed, was arrested at the SAHCO export shed of MMIA on Tuesday 8th June, 2021 when he brought a consignment from his client to a freight forwarder for export to Malabo in Equatorial Guinea.

Babafemi said when the package was searched, 150grams of cocaine concealed inside two pieces of air freshener were discovered.

A follow up operation the following day led to the arrest of Egbo Emmanuel Maduka, in his residence on Wednesday 9th June, Babafemi said.

The seizures were made on 4th and 8th June, 2021 respectively.

The agency added that on Friday, 11th June, 2021, a male passenger, Udogwu James Johnson, on Qatar Airlines from GRU in Brazil was arrested at D-arrival hall, MMIA, Lagos with nine wraps of cocaine that weighed 300grams in his underwear.