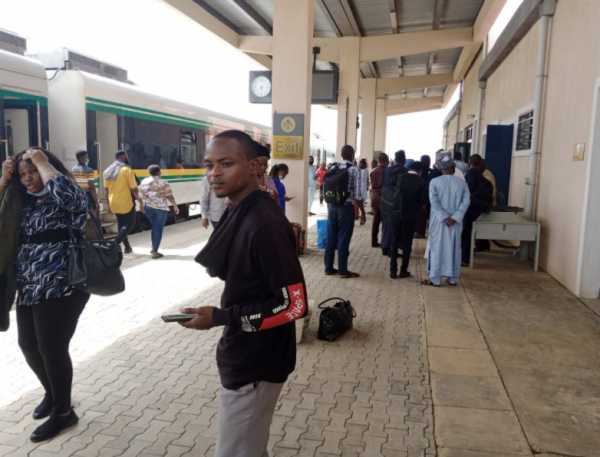 The Nigeria Railway Corporation has suspended train services along the Abuja-Kaduna route.

The corporation took the decision after the vandalisation of its rail track.

Information Nigeria had reported how some Kaduna-bound passengers were forced to return to Abuja after their inability to get to their destination as a result of the damage on the track.

Although some persons, including Shehu Sani, a former senator, attributed the incident to bandits, the Managing Director of the Nigeria Railway Corporation (NRC) Mr. Fidet Okhiria, blamed vandals for the act.

In a statement on its website on Thursday, NRC said services had been suspended on Abuja-Kaduna route for the safety of passengers and crew members.

According to the corporation efforts were being put in place to ensure absolute safety along the route.

It added that further information concerning the suspension will be conveyed to the public shortly.

Meanwhile, hundreds of passengers were stranded at Rigasa Railway station in Kaduna on Thursday morning.
Daily Trust correspondent, who visited the station, gathered that most of the passengers that booked ‎their train tickets online decided to travel by road.
An NRC official at the station told our reporter that  there was a problem with the train and so there would be no train.
A passenger, who simply identified herself as Hajiya said they booked their tickets online ‎to Abuja but had to return home.
“My husband and I booked our tickets online but as you can see we are returning home since there will ne no train for today because we heard there was a problem with the track,” she said.