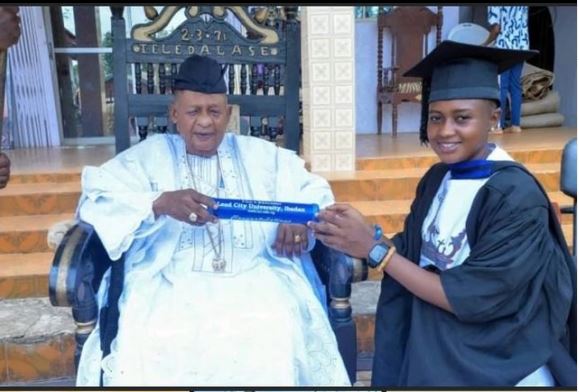 Princess Zainab Adebunmi Adeyemi has been praised after she made her family, friends and the community at large proud as she bagged first class in Physiology from the Lead University in Ibadan, the Oyo State Capital, last Sunday.

Her father, His Imperial Majesty, the Alaafin of Oyo decided to show how proud he is by gifting her a brand new car to celebrate her new achievement.

Zainab is a child whose intellectual abilities, creativity and potential for achievement are so outstanding that the child’s needs exceed differentiated general education programming, adversely affects educational performance, and requires specifically designed instruction or support services.

She does not only possess the ability to read and to understand nuances in the language, reads two or more grade levels above current grade placement, but reads widely in many areas or intensely in one subject area.

Her retention of a variety of information is superb, as she often amazes parents and teachers by learning new information quickly and remembering the details over long periods of time.

Princess Zainab’s keen observation and curiosity, coupled with her acute awareness of self and the environment is beheld to watch, just as she persistently pursue a line of questioning to learn more about topics of interest.

All these uncommon attributes found in exceptional children apparently inspired her Royal Father, the Alaafin of Oyo to present Zainab Adebunmi with a brand new Mazda car for the honour, proud and fame brought to the family.

The pretty, slim and athletic Princess Zainab Adebunmi could not hold back her excitement with tears of joy, as she knelt down before her Royal Father in appreciation of the surprise gift, and as a well brought up child.