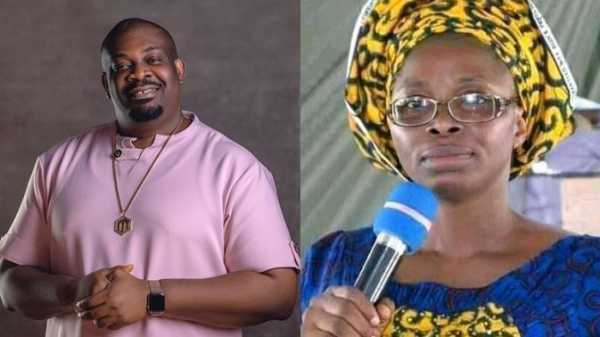 Don Jazzy expressed his wish to visit the remarkable clergywoman’s Rapture Proclaimer Evangelical Church of God in a Twitter tweet on Saturday.

Don Jazzy requested the location of the church from Nigerians, stating that he would like to attend a service there even if it was only once.

He wrote; ”Abeg who know where that mummy GO church Dey. I go like attend at least once.”

Meanwhile, The son of controversial preacher and Evangelist Funmilayo Adebayo, a.k.a Mummy G.O, has revealed that his mother is never concerned about the hellfire memes that have swept the internet.

He further emphasized that many of the memes and phrases about his mother that are spreading online have been altered.

In spite of her many provocative words and deeds, Samuel claimed in an interview with PUNCH that his mother has never coerced individuals or her followers to believe her.

He asked social media users not to take his mother’s words personally and to disregard or accept any of her teachings that fit their religious beliefs.

Samuel said, “Social media has always been a platform where anything can be posted at any point in time but everything that has been posted about her saying she said this and that are all lies, nothing is true about the memes, they are just fabricating the memes, everybody with their contents, writing all sorts of things and tagging her pictures. We are used to it; the best thing is to ignore them.

“Even though she said everything about hell, there is nowhere she said by fire, by force, people must agree and accept what she is saying. I don’t think she has ever made that kind of statement before.