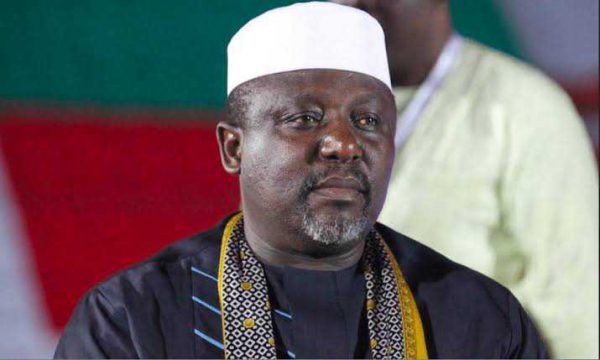 Senator Rochas Okorocha of Imo West claims that President Muhammadu Buhari has committed to investigating the criminal accusations brought against him by the Economic and Financial Crimes Commission (EFCC).

The commission filed a 17-count indictment against the former governor of Imo before a federal high court in Abuja on Monday.

Okorocha was charged just hours after formally announcing his desire to run for president.

On Thursday, Okorocha told journalists at the statehouse that the EFCC’s claims are “trumped-up to distract him,” and that a competent court has issued an order barring the EFCC from prosecuting him.

Okorocha also stated that he visited Buhari to ask for his intervention on the anti-graft agency’s planned prosecution and to seek the immediate release of his international passport still being held by the EFCC.

He expressed that it is the responsibility of Buhari as president of Nigeria to ensure that justice is served on all citizens, including him.

“The president said he would take up the matter, especially when he saw the judgment,” he said.

“He said, he’ll take up the matter and find out what is actually happening. And I hope he will do so. And I believe he will do that.

“One of the duties of a president is to protect the law of the land. And when an issue comes to an issue of judgment the duty is incumbent on the government of the day to ensure that justice is done.

“I came to demand justice that he should prevail and as the custodian, as the leader of our nation, he should be made to know that such is going on.

“I didn’t come here to say I don’t want to be investigated by the EFCC. That’s not the issue, that there’s a judgment on the ground.

“There’s judgment and there’s an order of court that I’m asking Mr President, who appointed the EFCC to recall that there was the law that established the EFCC. And if that law is good to make somebody EFCC, that law should be obeyed, too.”

When asked if he believes his suffering was planned by his opponents, the former governor of Imo said: “I suspect so.”