Home Entertainment My Hair Stopped Growing Ever Since My Late Dad Shaved Me At...
Facebook
Twitter
WhatsApp 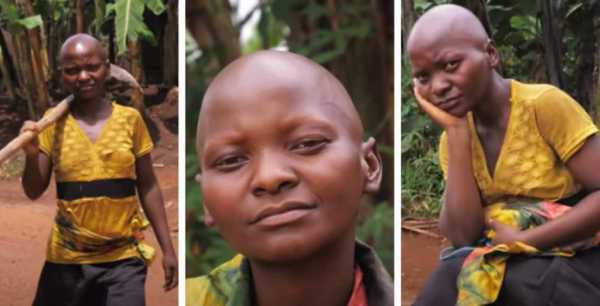 The story of mysterious tragedies that befall a 28-year-old lady and her family has been shared on the internet.

Kampire Josepha currently has no hair on her head and she is unable to grow any ever since it was shaved by her late father when she was five years old.

In an interview with Afrimax, Jose disclosed that for many years, her family concluded that her baldness was a result of witchcraft.

According to the young lady’s grandmother simply known as Patricia, her bald headed granddaughter was born normally with hair until it was shaved and never grew back again.

Things took an unfortunate turn after that day and her family knew that something was amiss when the father died immediately after the shaving session.

After the mourning period, they noticed that the little girl’s hair was all gone and her eyebrows were disappearing too. Jose and her mother sought the services of a village doctor who gave them herbs to apply with the promise that the hair would grow back, but it never did.

“We got tired and stopped because it was wasting all the little money we had,” Patricia added.

Not long after, Jose’s mother died too, throwing the family into panic and confusion as they could not fathom what had befallen them.

This was made worse by the fact that the young girl’s legs developed a condition that crippled her after a while.

“She started crawling on the ground like a frog, that is when we rushed her to the hospital,” the grandma recalled.

For the next four months, the grandmother and the young granddaughter she had taken custody of spent in hospital as she the latter received treatment. It was a timely intervention as her limbs were stabilised and she managed to start walking on two again, albeit with a limp.

When she became of age, Jose was able to find love and get married, but the union did not last forever as she had hoped. She says that her husband was always teased by friends for marrying a woman who was physically impaired and bald.

After six months of marriage, Jose’s hubby caved in and dumped her, fearing that their children would be born with her condition. With nowhere to go, Jose left her marital home and moved in with her grandparents where she still lives to date.