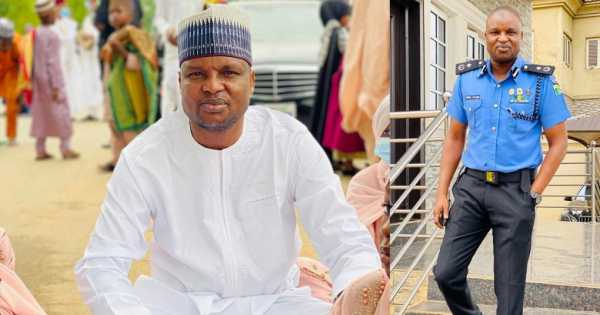 Suspended DCP, Abba Kyari has opened up in court saying that the National Drug Law Enforcement Agency, NDLEA worked with drug barons to bring cocaine into the country.
He made the confession in court according to a report by Vanguard.
He added that he was framed by NDLEA while trying to help a whistleblower get his payment.
Recall that Kyari and four other police officers under the IRT are currently in the custody of NDLEA for attempting to bribe an NDLEA officer with $61,000 to facilitate the release of seized cocaine.
An affidavit filed by Kyari’s brother, One Mamman Nur, rehashed the claim stating that drugs were being shipped in from Ethiopia with the ‘knowledge of NDLEA officers’.
Narrating the entire situation in the suit, Kyari stated; “That on that fateful day, the suspect as usual shipped drugs (cocaine) from Ethiopia to Enugu Airport. The officer of NDLEA cleared him within the airport, then officer of FIB-IRT arrested the suspect with the help of an information.”
“That before the informant accepted to work with the officers of FIB-IRT, they both had an agreement to compensate the informant.”
“That officers of FIB-IRT, having noticed that officers of NDLEA were the ones clearing the said suspect with his drugs (cocaine), they immediately took the suspect to NDLEA and also reported those officers involved in the act.”
“That instead of the NDLEA to handle the matter accordingly and bring their officers involved to book, they decided to frustrate the informant, thereby refusing to compensate the informant.”
“That it was at this juncture that the attention of the DCP Abba Kyari was called, who because the NDLEA officer involved is his friend, decided to intervene for the purpose of compensating the Informant.”
“That the NDLEA officer who refused to compensate the informant was the one who framed DCP Abba Kyari up on a trump-up allegation that he was trying to bribe him.”
“That the agent of the Respondent declared the Applicant wanted because of a mere allegation that he was trying to bribe an NDLEA officer without sufficient proof.”
“That the Nigerian Police Force, based on the allegation of the Respondent arrested the Applicant on February 12, 2022, and handed over to the NDLEA.”
Kyari’s bail hearing comes up on March 28th at a federal high court in Abuja.