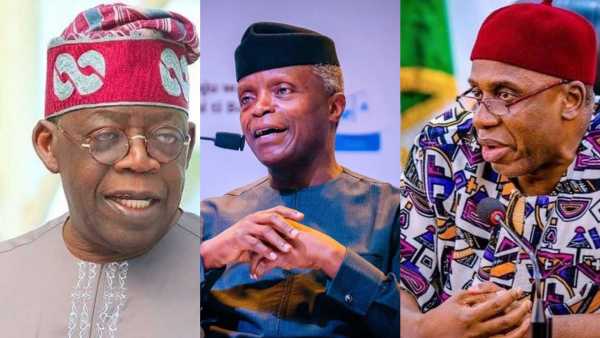 Vice president Yemi Osinbajo, surprised many Nigerians on Monday morning to the news of his official declaration of interest in succeeding his principal, Muhammadu Buhari, during next year’s general elections.

Osinbajo, who is undeniably one of the favourites to clinch the presidential ticket of the All Progressives Congress (APC), has served as the vice president of Nigeria for the last seven years

However, the vice president will come up against credible opposition from the APC National Leader, Asiwaju Bola Ahmed Tinubu, who has since declared his ambition.

Tinubu is believed to have personally handpicked Osinbajo to be Buhari’s deputy before the 2015 elections.

With Osinbajo’s declaration, he is set to go head-to-head with ‘the hands that fed him’.

Interestingly, the Minister of Transportation, Rotimi Amaechi, also declared his intention to be President over the weekend.

The rumour mill went into overdrive that Amaechi is Buhari’s preferred candidate.

Osinbajo’s speech on Monday, however, was a charm offensive in the direction of the President.

He spoke about how he and Buhari have “worked through some of the most difficult times in the history of our Nation, but we have remained focused on securing the country, providing infrastructure and growing our economy.”