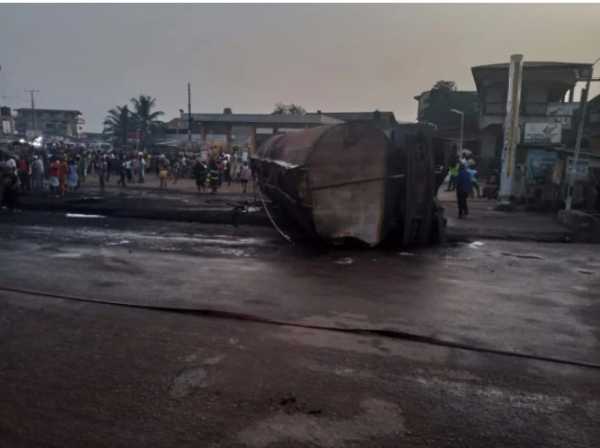 Many residents were jolted from their sleep in the early hours of Friday after a fuel-laden tanker fell at Alagbodo, along Lagos-Abeokuta Expressway and went up in flames, burning shops and vehicles.

It was gathered that emergency officials, including firefighters from the Lagos State Fire and Rescue Service, were deployed at the scene to put out the fire and salvage other properties.

It was gathered the fire broke out around 2am while some miscreants were scooping fuel from the fallen tanker.

Director of Lagos fire service, Margret Adeseye, while giving an update said one person was recovered dead from the inferno and three vehicles burnt.

She stated that the agency received a distress call at 02:16 am that a tanker conveying 45,000 litres of petrol to a filling station at Ajegunle along the expressway spilled its contents while negotiating a bend to the station.

Adeseye in a statement said fire broke out from the tanker as a result of the miscreants scooping fuel at the Toll Gate end of the highway, causing the petrol to spread through some roadside makeshift shops.

She said, “The situation is however being brought under control by the Agege, Ikeja and Alausa Fire crew of the Lagos State Fire and Rescue Service with the use of tactical firefighting application of chemical foam compound to suppress the fire.

“The public is hereby assured that the situation is under control as the process of mopping up and evacuation of the remains of the fire is ongoing. They should however exercise caution and restraint as outbound Lagos traffic has been diverted to travel with the inbound vehicular traffic.

“Unfortunately, a male adult was recovered suspected dead likewise three various brands of vehicles involved in the fire aside the tanker and shops.”